Home » From Oil to Soil 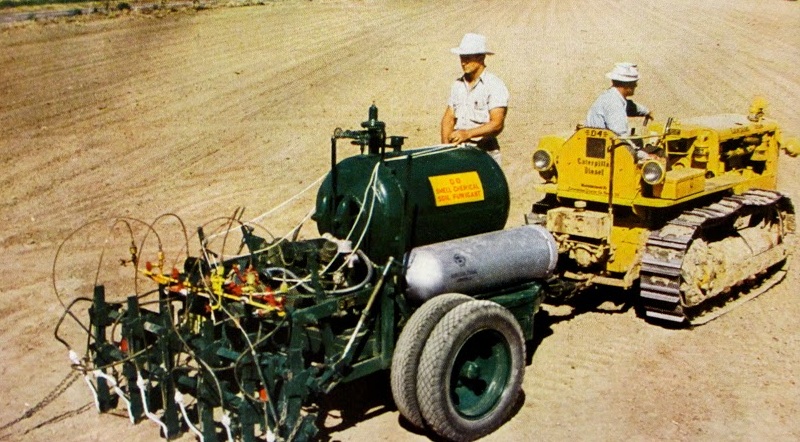 “People have a vision of agriculture that is totally foreign to what actually happens,” Romero says. “If you actually go where the food is grown, you see these people in space suits. They’re half human, half machine, out there totally decimating a field of cabbage or lettuce [to prepare the fields].”

Romero’s research led him to investigate how California’s fields came to be filled with these people in “space suits.” He traces the answer back to the 1920s, when major petroleum producers began looking for something to do with the waste products from oil refining. “We don’t think about waste,” Romero says, “but the United States produces more waste than commodities. Many industries are only profitable if they can get rid of some of that byproduct.”

Refining petroleum makes a great deal of waste, much of it highly poisonous. For growers seeking to rid their fields of pests, it is exactly “industrial waste’s toxicity that gives it potential use value in industrial agricultural production,” Romero writes in a forthcoming article in Agricultural History. “Industrial waste is often both very toxic and very abundant, making it a potentially useful raw material for industrial agriculture. In this transfer of toxic chemicals from the wastebaskets to the coffers of industry, industrial agriculture has functioned as a profitable sink for the producers of petro-chemical waste.”

The discovery of the potential symbiosis between toxic petrochemicals and the salad on your plate began, Romero discovered, in the 1920s, when the necessary physical and intellectual infrastructure developed in California, and chemical engineers learned how coax use—and profit—from toxic leftovers from the state’s oil plants.

Researchers found that oil byproducts could kill fungus or nematode worms in the soil, or act as pesticides, without killing plants. Growers, already using chemical fertilizers, figured out how to replace previous agricultural techniques, like crop rotation, with synthetic nutrients and soils sterilized by industrial waste. Trains moved these products from place to place. “This set the stage for the huge takeoff in industrial agriculture after WWII,” Romero says.

Romero’s history details a trajectory that began in the 1920s, when “technologists” at Royal Dutch/Shell began to explore the use of ammonium sulfate fertilizer in California. By the mid-1930s the company was delivering these chemicals into the fields through “nitrogation,” mixing ammonia directly into irrigation water. Seeking methods of injecting the fertilizers deeper into the soil, they borrowed techniques used to lay telephone cables to pipe ammonia gas deep beneath agricultural soils.

Shell later pioneered the use of another petro-byproduct, olefins, including 1,3-dichlororopropene and 1,2-dichloropropane, or “DD,” a dark chlorinated liquid that experimenters in Hawaii found achieved dramatic results in revitalizing a pineapple field infested with nematodes. “[DD] spread through the soil like a lump of sugar,” he notes. “Fumes shot out in a circle, killing every worm they reached…. It was almost as if the chemicals actively sought out the microscopic worms.”

Combining the two petro-waste products—DD and anhydrous ammonia—proved even more powerful, as was seen in the turnaround of diseased lettuce fields in California’s Central Valley. “Within months the evidence of DD’s subterranean killing power was unmistakable,” Romero writes. “Not only was DD incredibly effective, as a waste product of the synthesis of glycerol from propylene, it was also commercially affordable.”

That this revolution began in California was not by accident, Romero argues, as the state was uniquely primed for the takeoff of this marriage between toxic industrial chemicals and food production. California, Romero notes, had an extremely limited tradition of small-holder agriculture, since federal land policy created large farms rather than small plots.  “By the first few decades of the 20th century, California’s agrarian complex attained a degree of intensity, standardization, and specialization that existed nowhere else on earth,” he writes. 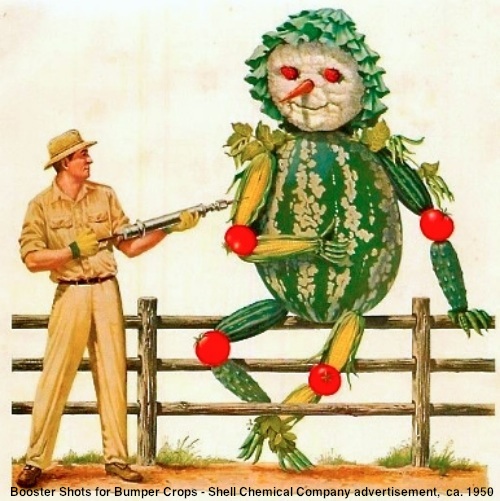 Unlike the midwest or other agricultural regions, most of California’s farmland was generally controlled by a handful of large companies. As a result, large growers made decisions that affected huge acreages. As a result, California’s agriculture had less variation between small plots owned by individuals with differing opinions about how to farm. Instead, farms in the state were maximalist, devoted to intensive production. “We don’t have farmers,” he says, “we have growers. That makes a huge difference.”

Of course, while the introduction of these new pesticides was a boon for farmers, it was hardly without its own byproducts. First, farmers found they were suddenly dependent on these chemicals for survival: “Chemical salvation was not a one off,” Romero writes. “Its acceptance was a Faustian bargain that meant that growers had to buy and apply chemicals every year to maintain commercial homeostasis.”

More disturbingly, the introduction of chemical toxins into the soil led to environmental impacts that cannot be undone. “While the propagation of petrochemicals within agriculture since WWII has led to astonishing yields, it has also resulted in pollution and contamination on such an immense scale that it will continue to stalk humanity for so long that we might as well as think of it as forever,” Romero writes. “A child born today, no matter rich or poor, even before they take their first breath, has hundreds of industrially made chemicals flowing through their blood. And yet although bodily contamination is now a prerequisite of modern life, certain groups face greater burdens by sacrificing their bodies upon the altar of agricultural employment; or by living near the industries that make modern agriculture possible, in turn, subsidizing our cheap food through their bodily internalization of industrial agriculture’s externalities.”

To investigate how petrochemicals were used to remove pests from farm land and crops, Romero worked in fourteen different archives across the United States, from the U.S. Patent Office and the Food and Drug Administration to the records of oil companies. “I had one day at Shell’s archive before the lawyers figured out what I was writing about, and invited me to leave,” he recalls. The reason, he says, is that the pollutants he studies, some of them laid down almost a century ago, are still subject to lawsuits today, as traces of cyanide and arsenic linger in soils and can often be traced back to different plants and companies.

Indeed, it was the toxic trail that drew Romero into researching California’s agricultural history in the first place. After college, he worked as a toxicologist in the Salinas Valley. “I thought I would change the world by measuring pollution,” he says. “But at some point I stopped wondering how pollution happened—I could measure that in streams—and started thinking about why.”

A background in chemistry enabled Romero to understand the technical patents and industry reports. The challenge, he says, is to take this hard science and “make the chemistry legible to people who don’t automatically understand it.” To help make hard science into an historical narrative, Romero works with a diverse group of Berkeley scholars, including the geographer Nathan Sayre, historian Robin Einhorn, and Gary Sposito, who teaches environmental studies.

Einhorn, who is a member of Romero’s dissertation committee, notes that “Adam brings true scientific expertise and a wonderful sense of historical irony to economic and environmental history,” and notes that his background in toxicology enables “him to show us how a motley crew of chemists, farmers, bureaucrats, industrialists, and entrepreneurs in other fields came together to discover that the toxicity of industrial waste created value and, in the process, to ‘chemicalize’ agriculture and our world more generally.”

The chemical-soaked story of agriculture in California is ultimately, for Romero, a story about people. “My family comes from immigrant labor,” he says. In the fields where he measured chemical runoff as a toxicologist, he says, he saw “me a generation ago,” spraying and fumigating fields. He developed this history to clarify what agriculture really is—a place where “a strawberry field becomes a raspberry field in a day” through the labor of agricultural workers and the application of chemicals.

For both the people and the land, but especially the laborers who are so often lost in our concerns about what we eat, Romero says his “goal is to make it less bad.” 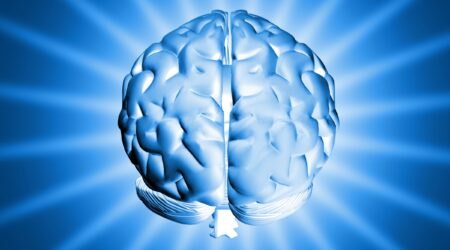 Solving the Mysteries of Brain Waves

In laboratories across the UC Berkeley campus, researchers are unlocking some of the mysteries surrounding "neural rhythms," the pulses, bursts, and waves of electricity that continually surge through our brains.

END_OF_DOCUMENT_TOKEN_TO_BE_REPLACED 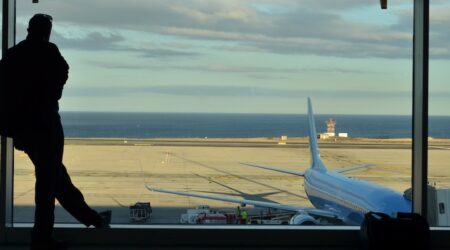 Investing in airports and other transportation infrastructure is a major driver of economic growth, according to new research by a UC Berkeley economics graduate student.

END_OF_DOCUMENT_TOKEN_TO_BE_REPLACED 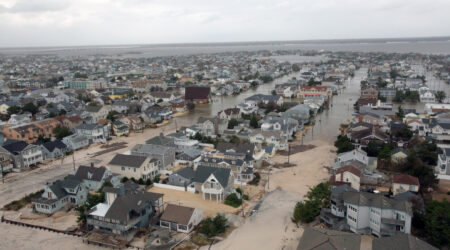