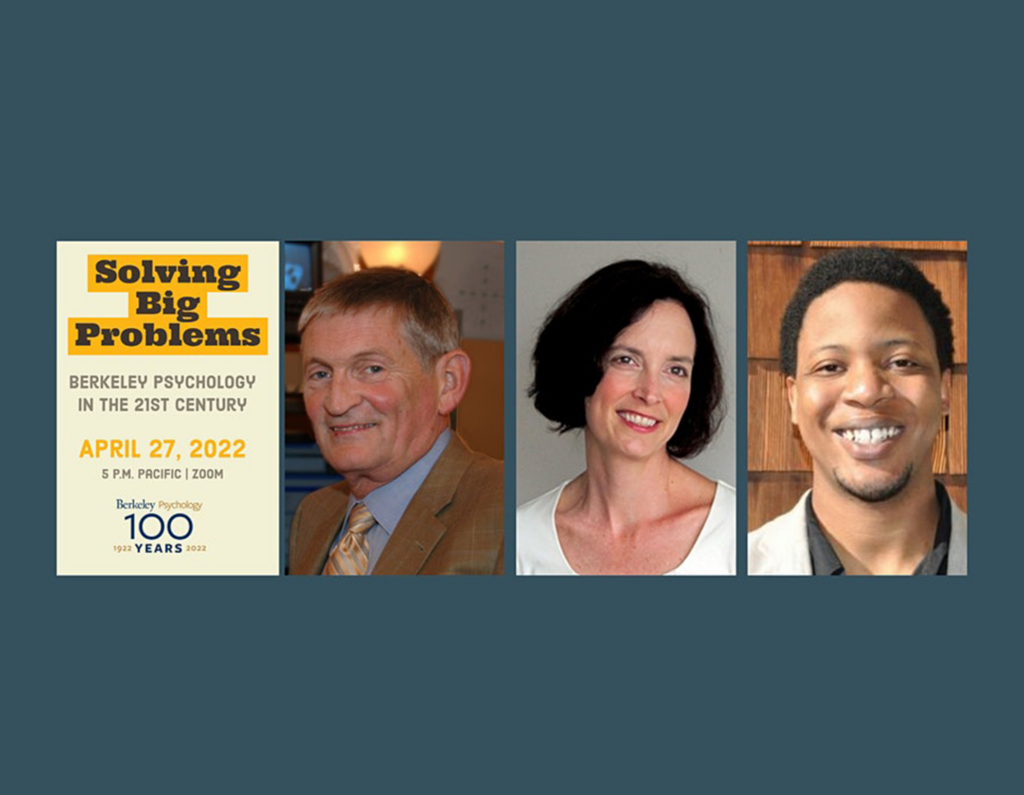 As part of our ongoing series of events celebrating the 100th anniversary of the Psychology Department at UC Berkeley, we are delighted to showcase three of our faculty and their research – Professors Robert Knight, Sheri Johnson, and Jason Okonofua. The cutting-edge research of each of these faculty and their students uniquely illustrates how psychological science can contribute to solving a broad range of big problems at both the individual and societal levels. After each faculty presentation, audience members will have the chance to engage the speaker with questions and comments.

How do we think, remember, speak, and socialize? Discovering the physiological substrate of these human behaviors presents one of the great scientific challenges of the 21st century. Evidence obtained from electrodes inserted into the human brain for treatment of medication refractory epilepsy provides unprecedented insight into the electrophysiological processes supporting human behavior. I will review some of our findings with implications for understanding brain function in health and how these findings might be used for development of neuroprosthetic devices for treatment of disabling neurological disorders.

For decades, scientists have considered the role of impulsivity in contributing to mental health and behavioral outcomes. In the last 20 years, researchers have shown that one form of impulsivity—the tendency to engage in rash and regrettable behavior during states of high emotion—is particularly related to poor outcomes. I will review some of the outcomes tied to this form of impulsivity, and I will highlight new treatment development work.

Sidelining Bias: A Situationist Approach to Reduce the Consequences of Bias in Real-World Contexts
Jason A. Okonofua, Ph.D.
Assistant Professor of Psychology

Bias and bias-reduction have become ubiquitous topics of research, policy, and practice. I will introduce an approach to study and mitigate societal consequences of bias that begins with the presumption that people are inherently complex, that is, including multiple, often contradictory patterns of selves and goals. When we conceptualize the person this way, we can ask when biased selves are likely to emerge and whether we can sideline this bias—alter situations in potent ways that elevate alternative selves and goals that people will endorse and for which bias would be non-functional. My research shows how sidelining bias has led to meaningful improvements for thousands of individuals in real-world outcomes, including higher achievement and reduced school suspensions for youth and recidivism to jail for youth and adults.

Robert T. Knight, M.D.: Dr. Knight is a Professor of Psychology and Neuroscience at UC Berkeley. His laboratory studies neurological patients with frontal lobe damage and also records electrical signals directly from the brain of neurosurgical patients to understand the role of human prefrontal cortex in goal-directed behavior and for development of neuroprosthetics devices for disabling neurological disorders. Dr. Knight has twice received the Jacob Javits Award from the National Institute of Neurological Disorders and Stroke for Distinguished Contributions to Neurological research, the IBM Cognitive Computing Award, the German Humboldt Prize in Neurobiology, the Distinguished Career Contribution Award from the Cognitive Neuroscience Society, the Award for Education in Neuroscience from the Society for Neuroscience and the Howard Crosby Warren Medal from the Society of Experimental Psychologists for Distinguished Career Contributions. Read more.

Dr. Sheri L. Johnson: Dr. Johnson is a distinguished professor of psychology at the University of California Berkeley. Her work has focused on two themes: reward sensitivity and emotion-related impulsivity. Her work has been funded by NARSAD, NIMH, NSF, and NCI. She has published over 275 manuscripts, including publications in leading journals such as the American Psychologist, Psychological Bulletin, Current Directions in Psychological Science, and the American Journal of Psychiatry. She is co-author/co-editor of six books. She is a fellow of the Association for Behavioral Medicine Research, the Association for Cognitive Behavioral Therapy, and the Association for Psychological Science, the Center for Advanced Study in the Behavioral Sciences (2013-2014), and former president of the Society for Research in Psychopathology. Read more.

Dr. Jason Okonofua: Dr. Jason Okonofua is a professor at the University of California-Berkeley. Jason’s research program examines social-psychological processes that contribute to inequality. One context in which he has examined these processes is that of teacher-student relationships and race disparities in disciplinary action. His research emphasizes the ongoing interplay between processes that originate among teachers (how stereotyping can influence discipline) and students (how apprehension to bias can incite misbehavior) to examine causes for disproportionate discipline according to race. Read more.