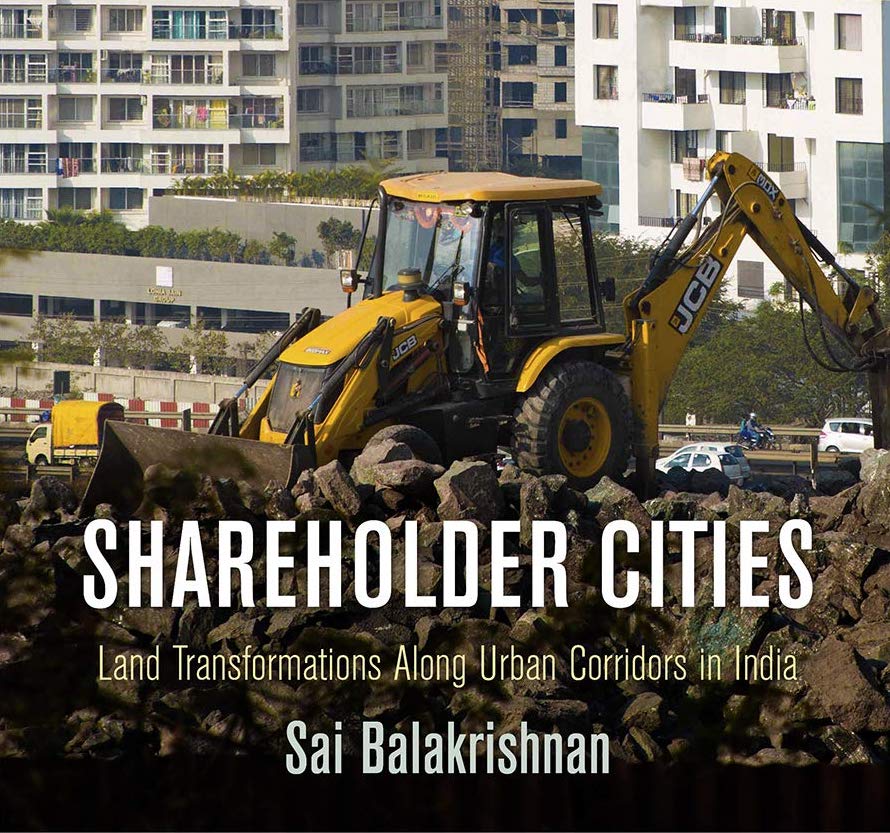 Co-sponsored by the UC Berkeley Institute for South Asia Studies

Please join us on November 16, 2021 from 9:30am-11am Pacific for an “Authors Meet Critics” presentation focused on the book Shareholder Cities: Land Transformations along Urban Corridors in India (University of Pennsylvania Press, 2019), by Sai Balakrishnan, Assistant Professor of City and Regional Planning at UC Berkeley, with a joint appointment with DCRP and Global Metropolitan Studies. Professor Balakrishnan will be joined in conversation by Sharad Chari, Associate Professor of Geography at UC Berkeley, and Michael Watts, Class of ‘63  and Chancellor’s Professor of Geography Emeritus, and Co-Director of Development Studies at UC Berkeley.

Shareholder Cities: Land Transformations along Urban Corridors in India  explores new spatial forms of urbanization by focusing on land contestations along infrastructural and economic corridors in liberalizing India. The book explores the production of private mega-enclaves amidst agricultural fields along these corridors. These corridor urbanizations defy our familiar binaries of city and village and our inherited disciplinary silos of agrarian and urban studies. Instead, the book shows how current urban development accretes onto older histories of agrarian capitalism, thus constituting processes of what Balakrishnan calls “recombinant urbanization.”

Economic corridors—ambitious infrastructural development projects that newly liberalizing countries in Asia and Africa are undertaking—are dramatically redefining the shape of urbanization. Spanning multiple cities and croplands, these corridors connect metropolises via high-speed superhighways in an effort to make certain strategic regions attractive destinations for private investment. As policy makers search for decentralized and market-oriented means for the transfer of land from agrarian constituencies to infrastructural promoters and urban developers, the reallocation of property control is erupting into volatile land-based social conflicts.

In Shareholder Cities, Sai Balakrishnan argues that some of India’s most decisive conflicts over its urban future will unfold in the regions along the new economic corridors where electorally strong agrarian propertied classes directly encounter financially powerful incoming urban firms. Balakrishnan focuses on the first economic corridor, the Mumbai-Pune Expressway, and the construction of three new cities along it. The book derives its title from a current mode of resolving agrarian-urban conflicts in which agrarian landowners are being transformed into shareholders in the corridor cities, and the distributional implications of these new land transformations.

Shifting the focus of the study of India’s contemporary urbanization away from megacities to these in-between corridor regions, Balakrishnan explores the production of uneven urban development that unsettles older histories of agrarian capitalism and the emergence of agrarian propertied classes as protagonists in the making of urban real estate markets. Shareholder Cities highlights the possibilities for a democratic politics of inclusion in which agrarian-urban encounters can create opportunities for previously excluded groups to stake new claims for themselves in the corridor regions.

Sai Balakrishnan is an Assistant Professor of City and Regional Planning, in a joint appointment with the Department of City and Regional Planning and Global Metropolitan Studies. Her research and teaching broadly pivot around global urban inequalities, with a particular focus on urbanization and planning institutions in the global south, and on the spatial politics of land-use and property. Her recent book, *Shareholder Cities: Land Transformations along Urban Corridors in India* (University of Pennsylvania Press, 2019), looks at the conflicts and struggles over the commodification / decommodification of land in India’s urbanizing countryside. Her work has been published in the IJURR, Urban Studies, Pacific Affairs, Economic and Political Weekly, and in edited book chapters, and her research has been quoted in media outlets, including The Guardian and Open Magazine. Her public-oriented scholarship includes writing for digital and print media, including the Scroll.in and the Hindu. Her ongoing research builds on her Shareholder Cities book, and is a joint collaboration with historian Arindam Dutta provisionally titled “After the City: Unmodern Development, Disurbanization, and Populism.”

Sharad Chari is Associate Professor of Geography at UC Berkeley, affiliated to the Wits Institute for Social and Economic Research (WiSER) in South Africa. He has written an agrarian historical ethnography of an industrial town in South India (Fraternal Capital), edited books (Development Reader, Other Geographies, and, forthcoming, Ethnographies of Power) and has completed a monograph on the remains of twentieth century racial segregation and struggle in Durban, South Africa (Apartheid Remains). He is currently working on queer biography at apartheid’s end, and a multi-site project on oceanic capital in the Southern African Indian Ocean. Sharad is on the Berkeley editorial team at Critical Times.

​​Michael J. Watts is Class of ‘63 and Chancellor’s Professor of Geography Emeritus, and Co-Director of Development Studies at the University of California, Berkeley where he taught for forty years He served as the Director of the Institute of International Studies at Berkeley from 1994-2004, was Director of Social Science Matrix from 2019-2020. Educated at University College London and the University of Michigan and has held visiting appointments at the Smithsonian Institution, Bergen, Bologna, and London. He served on the Board of Advisors of a number of non-profits including Food First and the Pacific Institute and was Chair of the Board of Trustees of the Social Science Research Council. Watts is a member of the British Academy, a Guggenheim fellow in 2003 and was awarded the Victoria Medal by the Royal Geographical Society in 2004, and the Berlin Prize by the American Academy in Berlin 2016.


Please register to attend this event. A Zoom link will be sent to registrants prior to the event.